At the risk of sounding negative in the middle of Brexit, there’s a lot wrong with the new Innovator visa route, a visa route which presumably was conceived in order to engender migrant innovation and business in the UK. The main problem being that it is effectively closed to migrants, certainly those overseas. But before we explore the reasons behind this fundamental failing let’s look at the central, shining feature of this new route, a route years in the making, which has eventually, belatedly replaced the reprobate Tier 1 Entrepreneur category: The endorsing body. Just a minute, this is the reason for its fundamental failing. Its central, shining feature, its underpinning brainchild, is, truth be told, its downfall. I should say from the outset, I seek not to denigrate the endorsing bodies in themselves, all, no doubt, fine organisations that perform valuable roles in propagating UK business but they are, to coin a phrase, not fit for this particular purpose – at least not in their current form.

It was a nice idea and one true to the Migration Advisory Committee’s review of 2015: Third party endorsement, “partnering with reliable organisations in order to select migrant entrepreneurs”, where “the selection of entrepreneurs should be carried out by industry experts where possible”. This was one of its better ideas. We all knew it, even the Home Office: their caseworkers were perhaps not the best people to assess the viability of business plans. It made sense to source this assessment out to business people or ‘industry experts’ who would endorse fitting business ideas. The trouble is, dare I say it, how this endorsement might actually work in the real world was not properly thought out.

So, what’s wrong with the endorsement? Well, to start with, few endorsing bodies, by their own admission, are ready to endorse. A route years in the making and nobody thought of giving these endorsing bodies the heads up. What was the consultation process? Was there one?

one of our specialist immigration solicitors of Qore Legal perhaps sheds some light as to why:

And, ready or not, there aren’t many endorsing bodies. Twenty-four at last count, as of the latest update of 1st May. We are led to believe by the UKVI guidance for endorsing bodies, twenty-five endorsements each are available. That’s not many potential applicants but it’s potentially a decent start. UKVI did, after all, intend to cut down on numbers and focus on ‘quality not quantity’, as per the MAC recommendation. Moreover, we can expect more endorsing bodies to join the roll call. According to Richard Jackson of UKVI in his response to ILPA, UKVI has received ‘several enquiries’ from other organisations wishing to be added as endorsing bodies. We’re well over a month into the category and no further bodies have as yet been added but we can hope that might change. However, a more pressing concern perhaps is the scope of the current endorsing bodies.

Endorsing bodies – anything for the mercantile?

Take a proper look at these endorsing bodies and they are largely tech incubators and accelerators. There are some exceptions such as Med City (Life Sciences) and Deep Science Ventures (well, deep science, of course) but the endorsement offering is very esoteric, almost impossibly high-flying stuff.  Take the noble-minded Zinc, for example, which has a 9-month full-time company-builder programme: “Each programme has a single mission, to solve a social problem in the developed world which affects at least 100 million people.” What about more humdrum business ideas that might not tilt at world domination but nonetheless could properly contribute to the growth of the UK economy? One wonders where Jeff Bezos’s idea for a website selling books would have gone for endorsement and whether he would have obtained it. There is nothing mercantile here, except for perhaps NatWest et al, and this is a serious, short-sighted limitation.

How does one become endorsed? Well, whilst some have been very helpful, most of these endorsing bodies aren’t giving much away. Most have no information relating to endorsement on their websites and many don’t answer enquiries. Loose lips sink ships. Indeed, in the update to the endorsing body list on 1st May, we are warned, “Please note that neither the endorsing bodies nor the business helpdesk will answer hypothetical or speculative enquiries.” Heaven forbid migrants might seek from endorsing bodies information on how to become endorsed. From what we’ve been able to glean, for the vast majority of bodies, you need to be accepted on their programmes in order to be considered for endorsement. Only a handful accept open applications. It’s pretty much a closed shop.

As you’d expect from bodies set up to promote business growth in certain areas of the UK, it’s all very regional – good in one sense as we shouldn’t neglect the regions but there are very limited options for those migrants who might like to settle in London or the south-east, a destination of choice for many migrants, I would suggest. But it’s not really aimed at migrants, is it? And this brings me on to my next criticism.

Of huge concern is the fact that most of these endorsing bodies, as is the nature of seed funds and accelerators, provide or facilitate investment for equity. Migrant entrepreneurs will be required, on most programmes, to accept investment and give away a stake in their company even where they might not want or need investment. The Innovator visa is supposed to be for the more seasoned entrepreneur, but the endorsing bodies don’t for the most part seem pitched at this entrepreneurial demographic, especially not those with their own funds.

And now I return to my opening gambit, that this Innovator route is effectively closed to migrants, certainly those overseas. As I have already alluded to, almost all of the endorsing bodies, from which we have been able to extract any information vis-à-vis endorsement, require participation on their programmes, programmes which usually run for months. Even the limited few that run open applications, such as Med City, require an applicant’s attendance at a pitch and interview or something similar. There is, to our knowledge, no self-contained online application process or otherwise that might be completed entirely remotely. Overseas applicants need not apply. Your resident Tier 2 or Tier 4 migrants might be able to participate in such programmes, but one imagines such demands would seriously clash with their work and studies and they are therefore also at a disadvantage.

How then might a wannabe overseas Innovator seek and secure endorsement? Surely, there must be a way. Can they come to the UK as visitors in order to do this? Well, not for Zinc’s 9-month programme, that’s for sure, but what about shorter programmes? Alas, such an activity does not come under any of the ‘permitted activities’ for visitors. The only possible option might be the ‘Prospective Entrepreneur’ visitor permissible activities:-

In a freedom of information request, the Home Office confirmed that as of 12 April 2019, they had not received any applications in respect of the 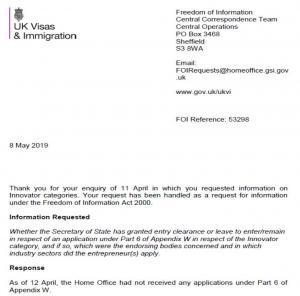 But there’s always the Start-up route, right, to funnel good applicants into the Innovator? This route has taken over seamlessly from the Tier 1 Graduate Entrepreneur route with the pre-existing Higher Education Institution endorsing bodies now endorsing bodies for Start-up migrants, open to all applicants no matter who they are or where they are. Wrong. We haven’t been able to find one Start-up endorsing body ready and prepared to endorse anyone but students or recent graduates (and usually only their own). And again, if in time this route does indeed open up to all applicants, one presumes any endorsement would require presence in the UK.

To cap it all, on an important side note, there is no there is now no scope for migrants to invest into existing UK businesses, which the MAC identified in its 2015 review as ‘Investor-lite activity’ that “may be injecting much needed capital investment to businesses that could struggle to raise finance from alternative sources”. It seems a valuable source of fundraising for UK businesses has been closed in the middle of Brexit. (Twice in the last twenty-four hours I have had to tell legitimate business owners that foreign nationals who would like to come to the UK to invest in and join their business can’t from a visa perspective.)

I have a client with a brilliant business background and I think, a brilliant business idea. It’s selling stuff through a website, you know, like Jeff Bezos. It seems to me she has also tapped into today’s healthy living zeitgeist – I think she’s on to something big. And she has her own funding. Her visa expires soon and it very much seems there’s no endorsing body that can endorse her. NatWest have advised she can apply in due course for their October intake but her visa doesn’t last that long. She’ll have to return home and take her brilliant business idea with her. She would have bloomed under the discredited Tier 1 Entrepreneur category, for all its faults. How many more like her must there be before this endorsing body business is properly opened up?

In some ways I won’t miss the Entrepreneur category. I always found it rather hard to type the word, especially with its mysterious brackets, and I certainly won’t miss the inane Home Office interviews where UKVI caseworkers held the secret formula of valuing companies. But I’m worried more by what it’s been replaced with – a visa system for ‘high value’ migrants that can’t apply for visas. And in these Brexit times! Who would have thought it…?

Jonathan Hendry is a solicitor and partner of Qore Legal, a City-based immigration specialist firm of solicitors. He is a Law Society immigration accredited Senior Caseworker with eighteen years’ experience specialising in UK immigration and nationality law and is an author for LexisNexis on the latest immigration law. He has an extensive high-net-worth clientele with a focus on investors and entrepreneurs and is up to the minute on the new Start-up and Innovator categories, especially with regard to endorsing bodies.

Any cookies that may not be particularly necessary for the website to function and is used specifically to collect user personal data via analytics, ads, other embedded contents are termed as non-necessary cookies. It is mandatory to procure user consent prior to running these cookies on your website.